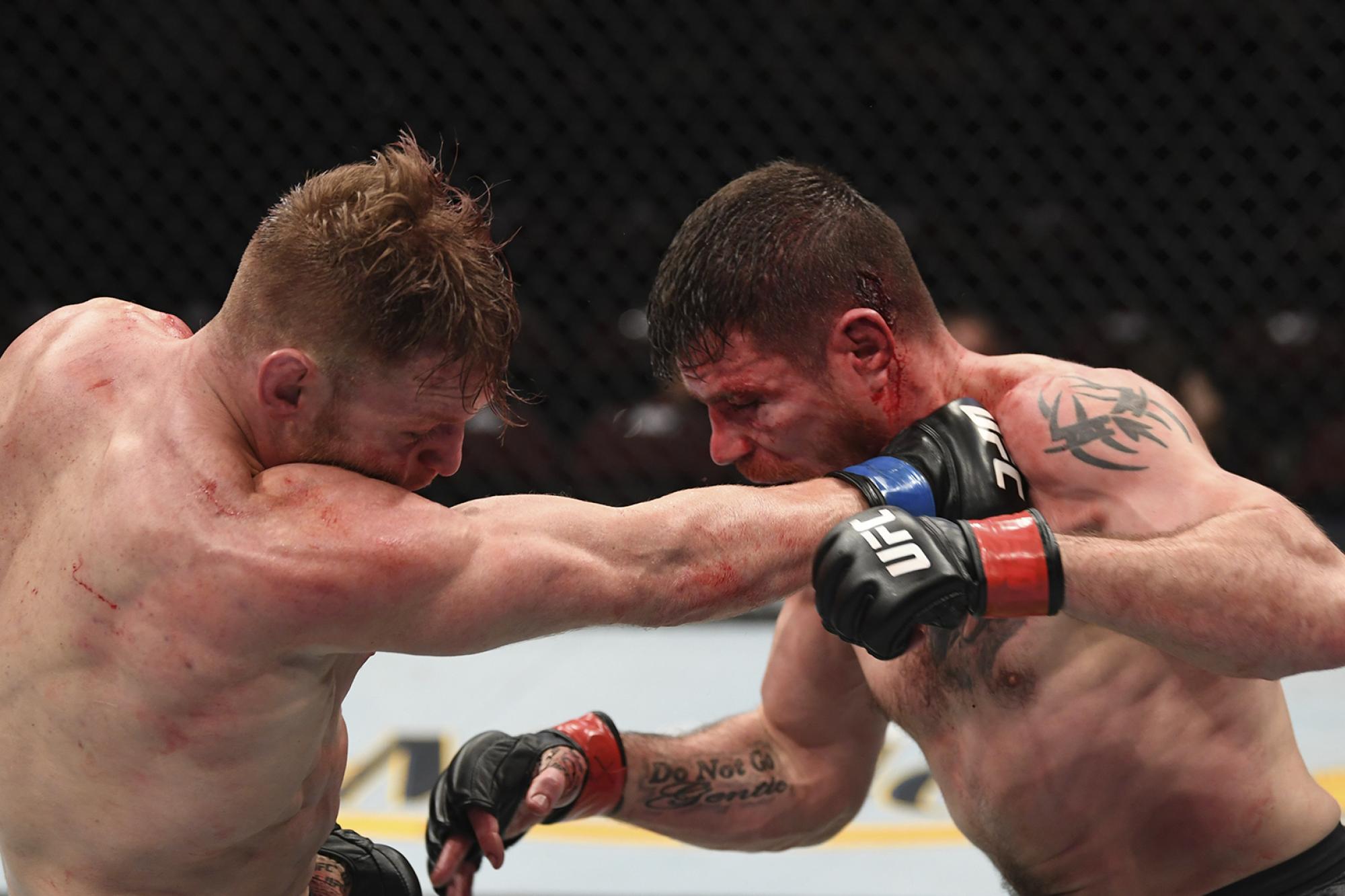 Fight Of The Night Power Rankings

2020 is just starting up! Here's how every Fight of the Night this year stacks up against each other through UFC Rio Rancho.
By Gavin Porter, On Twitter @PorterUFCNews • Feb. 19, 2020

Fight Of The Night honors is the type of recognition that fighters look to associate with their name.

Earning FOTN indicates that the bout produces adrenaline, excitement and fireworks in way that stood out from the rest of the card. That stand-out fight could come in the form of a back and forth brawl, a fast-paced slugfest or an incredible display of high-level martial arts.

After each event UFC.com will list out and update the power rankings of each 2020 FOTN ending the calendar year with a complete picture of the year’s best fights.

The criteria applied to each ranking includes: Entertainment value, watchability, competitiveness (back and forth), the type of fight (technical vs brawl vs well-rounded), intensity (crazy moments) and the quality of the finish (if there is one).

Each fight is viewed as if they are in a vacuum, meaning the context surrounding a fight does not factor into the rankings. For example: A title fight could definitely have more implications that the opening fight on the prelims, but the best fight based off the given criteria will receive the highest ranking.

Let's get to the rankings.

Note: These rankings only represent FOTN awards confirmed by the UFC. 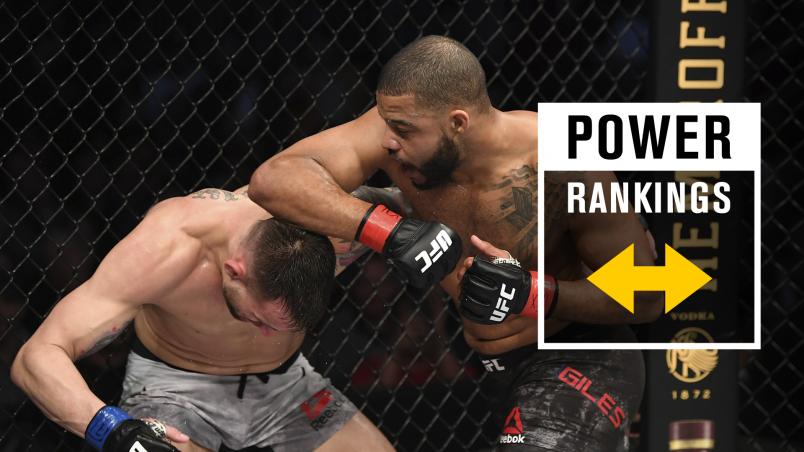 Welterweight James Krause made headlines around the MMA world on Friday when he stepped up on a day’s notice to face Trevin Giles at middleweight, and rightfully so, but it was Houston’s Giles who took the victory by way of an exciting three-round split decision.

Krause got a takedown in the opening minute, but Giles was up to his feet immediately. Krause stayed locked on and took Giles’ back as they went back to the mat, and while the veteran threatened with a choke, in the final minute it was Giles getting free, rising and scoring with some hard shots before the end of the frame.

Giles kept it standing for the first three minutes of round two and that allowed him to land several hard blows on Krause. As the bout went to the mat with under two to go, Giles took the top position and landed a barrage of hard shots on the tiring Krause, drawing a hard look from referee Jacob Montalvo before nearly sinking in a choke with seconds to go in the round.

Krause got off to a good start in the third, as he was landing good shots from all angles. Midway through the round, Giles rattled the bloodied Krause but wasn’t able to put him away, but his surge was enough to take the nod on the scorecards and snap a two-fight losing streak. 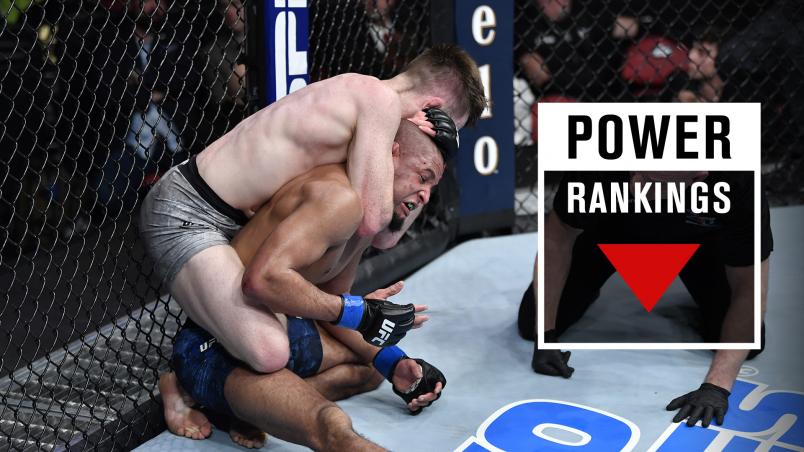 Fighting for the first time since August 2018, bantamweight up and comer Brett Johns snapped a two-fight losing streak with a third-round submission of Tony Gravely.

Johns dominated the first round behind a slick grappling attack that nearly produced a finish in the closing seconds of the frame. Gravely came out fast for the second, though, landing a couple hard shots on the feet before slamming Johns to the mat twice. Johns soon broke out of his slow start to the round, but neither fighter could pull ahead decisively before round’s end.

Gravely got a takedown to start the third frame, but Johns responded well and took his foe’s back. A barrage of ground strikes followed and, this time, when the Welshman sunk in the rear naked choke, Gravely was forced to tap out at 2:53 of round three. 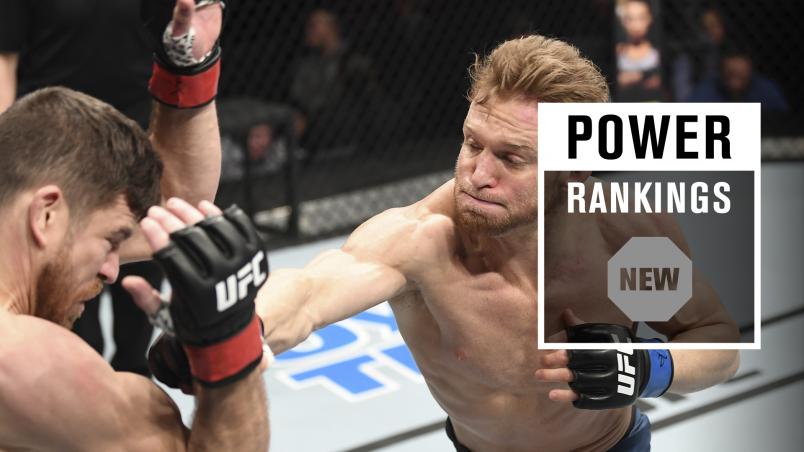 Scott Holtzman won the most important fight of his career, taking a unanimous decision over veteran lightweight star Jim Miller in a grueling three-round battle.

The fight stayed on the feet for the first five minutes, each fighter having his moments before the horn sounded. For Miller, the left hand was the weapon of choice, but in the second half of the round, Holtzman found his timing with his right upstairs, making sure he got the veteran’s attention.

In the second minute of round two, Miller used a missed spin by Holtzman to wrap up his foe, but “Hot Sauce” got free quickly. The two then let loose with their strikes at close range, both emerging bloody before a clinch at the two-minute mark. Holtzman used the position to get a takedown, and he finished the round with a series of ground strikes.

The third was a war of attrition in the pocket, with Holtzman and Miller both digging deep in the high altitude to get the win, but it was Knoxville’s Holtzman who took the nod via scores of 30-27 and 29-28 twice,